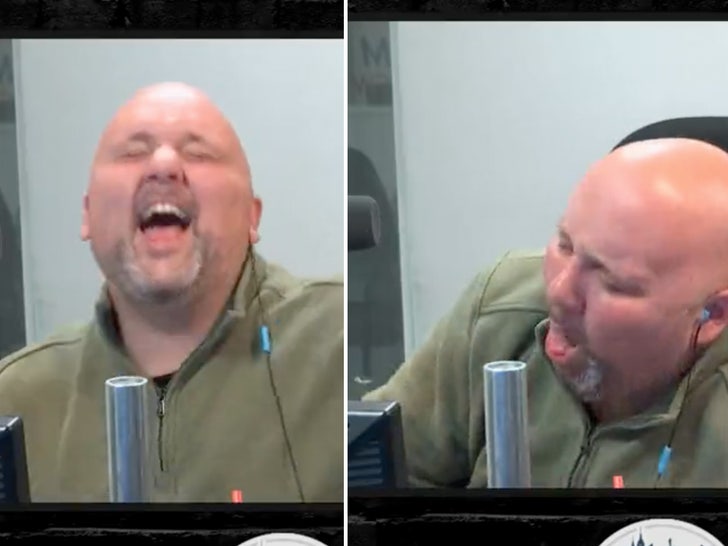 Get a load of this — a sports radio producer literally couldn’t keep his crap together after hearing a joke live on the air … ’cause he laughed so hard, he pooped his pants!!

Here’s the deal — CBS Sports Radio contributor Shaun Morash was, ironically enough, reacting to a silly conversation about the Philly Phanatic pooping on people’s chests … when disaster struck for himself.

Morash damn near came out of his chair over the joke … then admitted me made a mud pie in his trousers.

“I just went in my pants,” Morash said as he unplugged his headphones and rushed to the restroom.

Here’s the uncensored version from the simulcast. Pete hit the dump button as Mraz has an accident from laughing so hard. Dark day. pic.twitter.com/Cv7u5DRPZd

Naturally, everyone else erupted in laughter.

Morash later returned with his head down … saying he used a “lot of paper towels” and couldn’t look the guys in the eyes.

The most disgusting part came when Morash showed off the damage — with the crew looking on in horror.

Damon Amendolara, the show’s host, said he was glad that Morash found the joke funny … but was concerned that his colleague couldn’t control his bowel movements.

“On the other hand, I’m really terrified of a guy that, if you laugh really loud, can’t control the bowels,” said Amendolara. “It’s like somebody dumped a milkshake down his pants!”

Morash explained what exactly happened … saying, “I laughed too hard up and friction down. Luckily, it wasn’t mega poundage.”

Security bolstered after alleged assault of teenage girl at housing for...